This is second tutorial of Node.js. Previously, we got familiar with Node.js. Here we will do something interesting with node. In this tutorial, we will build an authentication module to verify usernames and passwords using cloud-based NoSQL technology. Broadly, cloud based NoSQL technology is built for handling large scale structured and unstructured data. Companies such as Microsoft, Google, Amazon, and Facebook make extensive use of NoSQL technology to house the vast quantities of data generated by their users.

What we are going to build?

Application for authenticating usernames and passwords from server-side.

How to install Express.js in Node

Code Explanation: This is how to install express.js in node. -g says its a global module. express@2.5.8 says install express version of 2.5.8. Thats all for installing express. 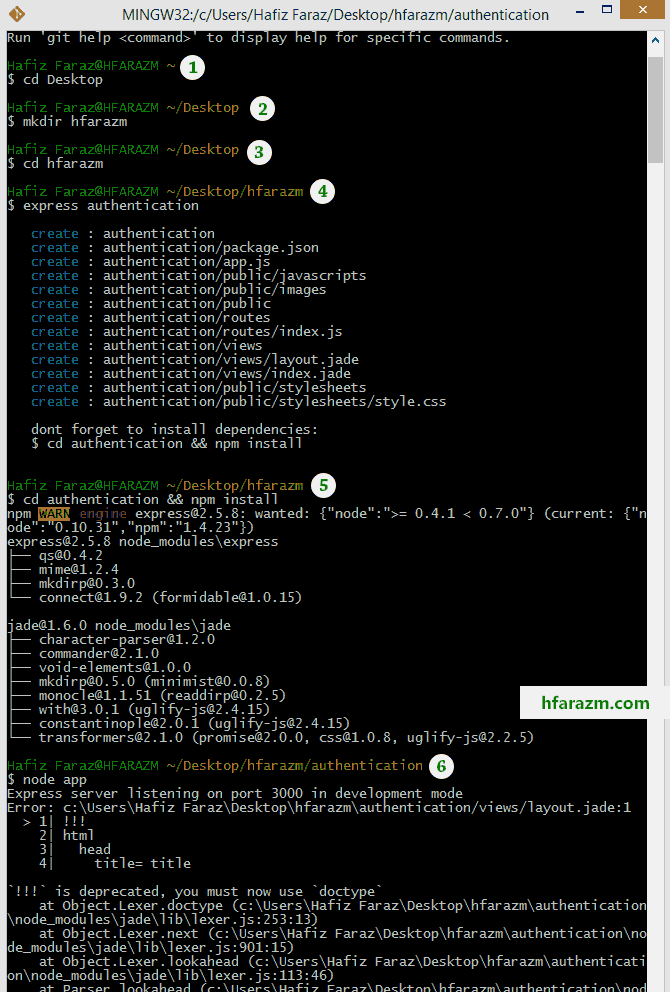 Explanation: I have tagged above pic with numbers which represents code entered by me. The code is written in GIT BASH (not command prompt). So Tag 1 says that, change directory to Desktop (watch the case sensitivity). Tag 2 says that, now you are at desktop, make a folder and name it hfarazm. Tag 3 says that, change directory from desktop to hfarazm (newly created folder). Tag 4 says that, create a basic default express application named as authentication in hfarazm folder. Tag 5 says that, here we are installing dependencies (modules which our application will require). we change directory/folder from hfaraz to authentication then said install node package manager. question is how we gonna know about dependencies? well if you take a deeper look at couple of lines above step 5 of above pic you will see the exact line which i have written at step 5. but where these dependencies are defined? these dependencies are defined in root of your project folder within package.json file. Tag 6 says, start the app. write after step 6, it shows us that application can be accessed at localhost:3000 in your browser. when you open the application in browser.

By typing localhost:3000 your express.js app will look like this:

These are errors. Now lets fix this, I have highlighted some text in above pic. Goto the highlighted file hfarazm > authentication > views > layout.jade and replace the code in layout.jade with the following:

Goto root folder of your application i.e authentication folder and open package.json file and add following code to it(this is where you specify your project dependencies):

Explanation: Tag 1 says that, write the exact version of jade as written by me. Tag 2 says that, add another dependency named as mongoose and specify it version to be 2.6.5. Now that you have update package.json with dependencies you need for this application. Are they updated in project? answer is no. So how you check dependencies are also update in NPM(node package manager)? goto GIT BASH and while you are in authentication directory(which we created earlier – your project root directory) write:

Now you will get errors. saying jade and mongoose as INVALID. This means you need to install both these modules. you know how to install them right? ok here is how:

now again check the installed modules for your project using: npm ls. you will get no error. good to go. start your app now using: node app. Now you have created your project. Its difficult for the first time and a piece of cake for second time.

Now your application is setup, time to create a form that will get username and password and post it to the server. If you remember, Node.js is deliberately minimalist, with very little that is done automatically. If you need to read a file from disk, you need to explicitly program it. so if your application is running then press CTRL+C to stop your local server and then goto your application folder which in our case is authentication folder. You will find an app.js file open it up and add the following code (having highlighted line numbers) to it (or you can copy/paste code from here to your app.js file):


Talking about highlighted line numbers, You just told express.js that I m gonna read some file from the disk and if user moves to /form URL then you must take him to specified file or in case of error throw him error. secondly, line 48-56 is handling submission, when user clicks on SIGN UP button. We shall create file that is specified at line 8 shortly. Talking about Line 35: it says ok when the URL is like localhost:3000/form, then goto form.html file. So lets create form.html file at root of your project i.e hfarazm/authentication/form.html like this:

its just simple html form. Question is, how user is handled and database works? It comes from the users module, check the Interacting database heading below, but first lets just work with database like this:

In order to create a users module, we’ll write a db module. Add the following code into a file called db.js in a directory called lib: 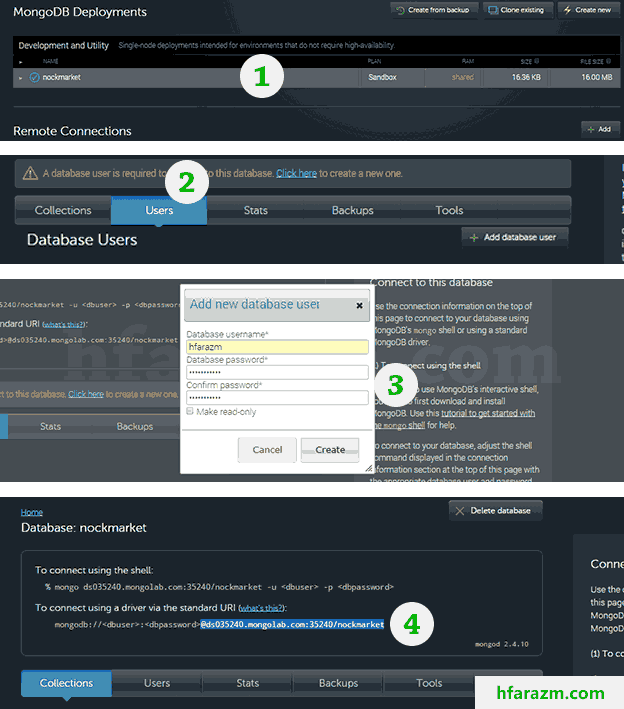 Explanation: Tag 1: click on database that you created at the start of this tutorial. Tag 2: now click USER. Tag 3: now add your desired database username and password and click create. Tag 4: copy the highlighted URL (not this but yours) . Open db.js that you created a step before and replace text in highlighted line numbers with your mongoLab credentials and url that you copied. This is how we tell express about database. easy enough. Now we have created a user that have access to database, time for interacting with DB.

To interact with database we need to have its schema(a way to define the structure of a collection), that schema can be placed in “User.js” file under “models” directory like this:


Code Explanation: This file is about handling user input. It requires a db connection at line 1. Then it tells the schema i.e how to take usernames and passwords. Finally, it tells about what to do when instance of object is successful/failed. Thats all folks.