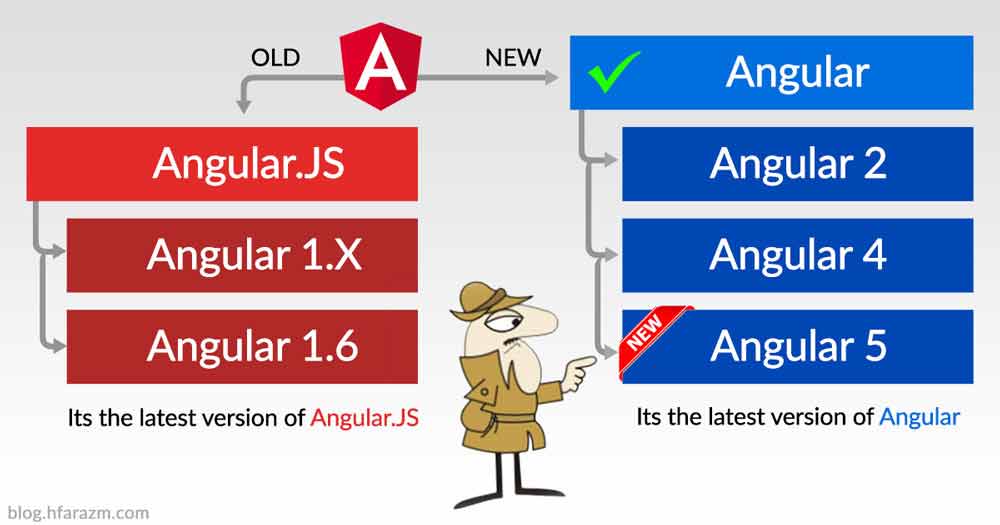 We know what is AngularJS? but you might have heard about Angular, Angular 1, Angular 2, Angular 3(perhaps), Angular 4 and Angular 5. And you might be thinking what are all the Angular versions and what is the difference between AngularJS and Angular? Before diving into the explanation, here is a short answer, AngularJS is an old boy. It supports legacy browsers but low in performance and carry bugs while Angular is a rewritten version of AngularJS with tons of new features and improvements. Jump straight to versions, differences, and FAQs.

In Angular, We have these big version numbers but in reality, they do not differ that much. Most of the time we only have minor changes since the introduction of Angular. For instance, if you have an Angular 2 App, you can easily upgrade to Angular 5. So there is no reason to be super confused. But the difference only lies in Angular.JS and Angular as these are incompatible with each other means you cannot easily upgrade your Angular.JS (Angular 1) app to Angular 5 due to major changes like:

What should I choose Angular.JS or Angular?

If you are developing a new app, and it does not need to support legacy browsers then Angular is the way to go as it is fast and can be easily updated to newer versions. But if you have an existing large app written in Angular JS then you might have to stick with AngularJS until unless it is buggy.

Why we have the different versions of both AngularJS and Angular? Why not just keep on updating Angular alone?