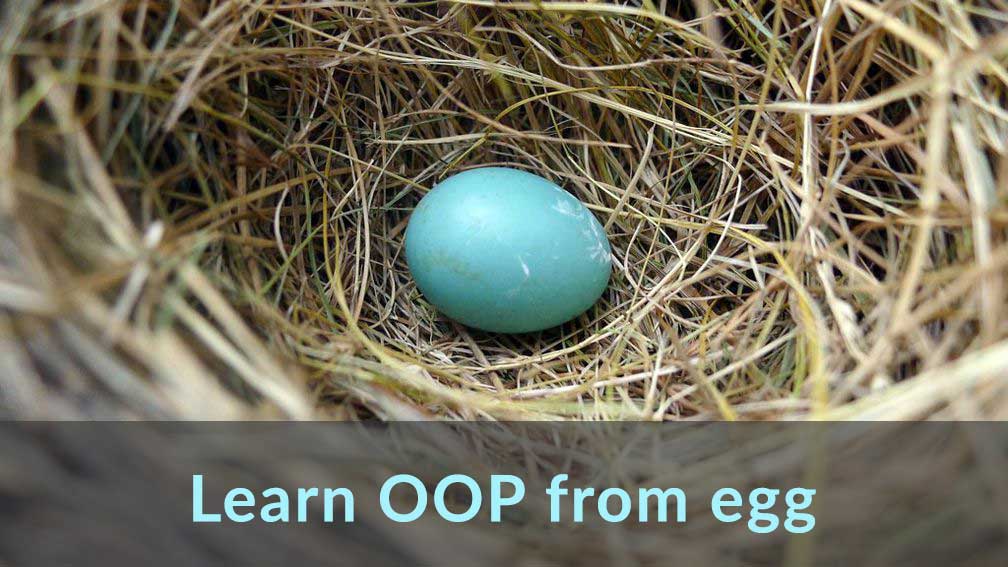 This is a quick tutorial on object-oriented programming (OOP) in PHP. There are two parts of this tutorial. I will explain OOP with the help of an egg. So let’s get started.

Target Audience: Developers who know procedural PHP but want to quickly learn about OOP in PHP.

When you look at an egg you can say its an egg. Basically, you are defining that object name egg. And also that egg has properties such as big egg or small egg.

In the same fashion, a class is just a definition of an object. Every class definition begins with the keyword class followed by the class name. Then you have curly braces that surround the class definition. Here I am defining a student class and making use of two built-in methods:

Your egg can have properties e.g white egg, brown egg, etc. You can define properties inside the class definition.

You can do different things with egg e.g you can cook it and can have a boiled egg, fried egg, etc. These are different methods.

When we define a function inside a class definition it is called a class method. Some people call it class function but the class method is a more appropriate term. We will make use of two functions here:

You have a dozen eggs in front of you. You decide to boil the third egg. Now you are referring an instance.

Refer an instance means when we call a class method it must refer to the “instance properties” instead of “class properties”.

You have two types of eggs. One is chicken egg and the other one is duck egg. Both are called eggs. The chicken egg has some properties similar to a duck egg, that’s called inheritance. But at the same time, a chicken egg is different from duck egg in some way. That’s called subclass.

When a new class takes on properties and methods of an existing class, is called class inheritance or simply inheritance. The class which inherits from a parent class is also called subclass. Inheritance prevents code repetition by organizing code. We are defining three classes i.e User, dealer, consultant.

We will be making use of the following functions:

Last crazy example, lol, when chicken is sitting on an egg, that’s private. When chicken is not sitting on it, farmer and other chickens can have access to it, that’s protected. When a farmer brings eggs to the market, on the shelf, that’s public.

Let’s see how to use them:

Hafiz Faraz Mukhtar is an expert Web Developer, SEO specialist, and Graphic Designer. Hafiz Faraz is an expert in WordPress design and development. If you would like to hire him, here is his Upwork profile link: https://www.upwork.com/fl/hfarazm